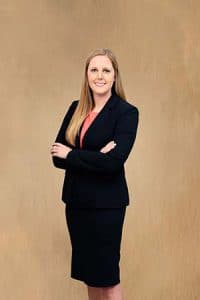 During her time at Cumberland, Mallory was a Senior Associate Editor of the American Journal of Trial Advocacy. She also became a published author with her note titled “Regulatory Agencies and the Continuing Threat to the Attorney-Client Privilege”. Mallory graduated in the top quarter of her class.

While in law school, Mallory’s legal experience focused on personal injury and mass torts. She also had the opportunity to extern for a federal magistrate judge while in Birmingham. Mallory quickly discovered she possessed a niche for family law after earning the highest grade in the Domestic Relations course and receiving the Scholar of Merit Award for Domestic Relations.

Upon graduation from law school, Mallory moved home to Tallahassee and shortly thereafter began working at Thompson, Crawford, Brown & Smiley. Mallory became an associate attorney at the firm in 2016. Since becoming an attorney, Mallory has gained invaluable litigation experience and has also had the opportunity to interact with various clients.

Mallory is an active member of the Junior Woman’s Club of Midtown, serving as Secretary of the board, in addition to volunteering for the Club’s various projects. She is also an active member of her homeowner’s association and is currently sits on the board. In her spare time, Mallory enjoys taking her dogs, Gizmo, Violet, & Dopey, on walks and spending time with her husband, Martin.