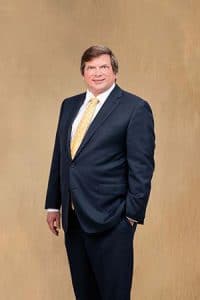 Tom Thompson grew up in Tampa.  After graduating with honors with a Bachelor of Arts degree from the University of South Florida, Tom was hired as a legal assistant with the Tampa law firm of Haas, Boehm, Brown, Ridgon, Seacrest, and Fisher. While employed by the firm, Mr. Thompson worked in the field of insurance defense with emphasis in property and commercial liability claims. Mr. Thompson later joined the construction litigation department of Johnson, Blakley and Pope in Clearwater prior to his entry in law school.   Mr. Thompson attended the Florida State University College of Law where he was an active member of the Law Review, a published author and member of the law Review’s editorial board. Tom was elected Executive Editor in his third year and directed a special volume devoted to issues then pending before the Florida Legislature.

Since the establishment of Thompson, Crawford, Brown and Smiley, Mr. Thompson’s primary practice had remained in the litigation field, both as plaintiff and defense counsel. In addition to serving many local clients, he has served as counsel for the State of Florida, Omni Insurance Company, Arbella Mutual Insurance Company, Superior Insurance Company, Philadelphia Insurance Company, 21st Century Insurance and Nova Casualty and self-insured companies including Budget Rent-A-Car Systems, Inc., Prestige Home Centers, Inc., and Westinghouse Electric Company. In addition to defending tort, contract and insurance coverage claims, Tom has experience litigating racial and sexual discrimination and RICO actions on behalf of these and many other national, statewide and local clients.

Mr. Thompson is Board Certified in Civil Trial and is a member of both the Florida and Georgia Bars and is admitted to the Federal Bars for the Northern and Middle Districts of Florida, and the Middle District of Georgia, along with the Eleventh Circuit. He is a member of the Tallahassee Bar Association, the Defense Research Institute the Florida Defense Lawyers Association and in 2001 was appointed by the Florida Attorney General, Bob Butterworth,  as a Chairman for the Florida New Motor Vehicle Arbitration Board, commonly known as the “lemon law board.”

Tom has received recognition from the Florida Bar for his expertise in the field of civil trial law and has been “Board Certified” in that field by the Bar as a result of his 17 years of trial experience combined with dozens of trials and superior ethical reputation throughout the legal community.

Tom is the director of his local neighborhood association and lives in Tallahassee with his wife, Coni, and their three children.